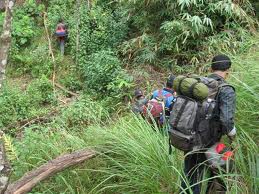 Mostly the youth is involved in such sports in Kozhikode, but over the years, many of the older men have also been seen to be involved. Kozhikode is a place which supports such sports because it has the mountains, water bodies, etc which are required to perform such sports. The outcome of such sports depends mostly on the weather conditions as they are always variable. If the weather is rough, adventure sports like river rafting will get very difficult, which is enough to change the outcome. Rock quality of the mountains due to rain, snow etc. can differ to a huge extent which becomes a challenge for the athletes. Some of the adventure sports that take place in Kozhikode are given below.

Trekking in Kozhikode is a delight because you can witness a lot of beautiful views as you keep climbing. The best area for trekking in Kozhikode is the Thusharagiri Falls. There is a small winding road in the Adivaram Village that serves as a branch to the NH 212. Around 10 kilometers down this road, you will reach the base of this amazing trekking trail. There is a tourist facilitation center which will assist you in getting all the information required for trekking.

As and when you start climbing higher and higher, you will start seeing the Thusharagiri Falls final position. Almost at the end of the trekking route, you will be able to see not less than 4 waterfalls. The trekkers have to walk on narrow bridges over water. From the base of the Thusharagiri falls, rises another trail which is ideal for trekking and is used by trekkers in huge numbers.

Another ideal place for trekking is the Kozhippara Falls in Kozhikode. This place is a great attraction for tourists and locals in Kozhikode. Trekking and swimming can easily be done here. Also, a place called Vallari Mala is quite famous for trekking as it has plenty of trekking routes for those who are interested, and each route is quite different from the other. So you can kind of choose the level of difficulty for your trekking challenge.

Paragliding has gained a lot of popularity in Kozhikode. With the paragliders, the people can also enjoy the view of the entire city, and more, depending on the altitude they want to or are able to achieve. Paragliding in Kozhikode is done at the Kappad Beach, which is one of the oldest beaches in the city and the state.

Rock climbing can be done on natural rocks and mountains or artificial ones as well. The descent is more risky than the climb because by the time the person starts the descent, he or she is already tired. Even the descent involves as much power and determination as is needed during the climb. This adventure sport is recognized by the International Olympic Committee. In Kozhikode, rock climbing can be done at the Thusharagiri Falls and bookings can be done at the Facilitation Center near to it.

Snorkeling is also gaining popularity amongst the people of Kozhikode. It allows a person to view the underwater attractions with ease and comfort and for extended periods. Snorkeling can be done in Kozhikode at the Kappad Beach.

Just like any other adventure sport, water skiing requires the person to have adequate strength and balance. This is enjoyed by people of all age groups in Kozhikode. It is done in Kozhikode at the Kappad Beach.

River rafting is fun and dangerous. Many a times this adventure sport has proved to be fatal for some. But it is still well enjoyed by many people in Kozhikode. In Kozhikode, rafting is mainly done at the Thusharagiri Falls on the River Iruvanjhipuzha. The total length for rafting is around 8 kilometers long and on an average, it takes around two hours from the start till the end. There are different classes or grades of the rapids on the rivers. The rapids on this river are grade 2, which makes it a challenge for the participants as Grade 2 means that the water is somewhat rough and there are rocks as well, which make maneuvering the raft essential.

In Kozhikode, kayaking is done at Thusharagiri Falls. Kozhikode recently held the Second International Kayaking Championship. In this championship, 14 foreign nations took part, which has made this sport more popular than ever in Kozhikode. This championship has taken the adventure sports to a totally different level in Kozhikode.

Kozhikode has many water-related adventure sports. So how could Jet Skiing be left behind? A company called Aqua Frolics has planned to launch jet skis and banana boats at Kappad Beach in Kozhikode, much to the delight of the adventure loving locals. The prices are so low that tourists and locals, both will be able to enjoy these sports without stressing themselves much.