Kozhikode is a city around 410 kilometers (255 miles) north of the state’s capital Thiruvananthapuram. The city of Cochin is only 188 kilometers from Kozhikode. The city’s eastern edges rise to around 15 meters. With an elevation of just 1 meter (3 ft), the coastal belt is sandy and the midland is lateritic. The shoreline is around 15 kilometers long and the central and eastern regions are dotted by small hills. The Laccadive Sea, also known as the Lakshadweep Sea, lies to the west of the city. The Sahyadri Mountains rise to the east, around 60 kilometers from the city. 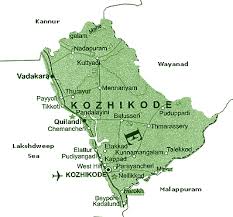 Kozhikode and its suburbs belong to the typical classification of land in Kerala, which are the low and midlands. Kozhikode is characterized by lagoons and backwaters, thus, receiving runoff from the various rivers surrounded by it. It is also subjected to salinity intrusion. Beach ridges, backwater marshes and sandbars are landforms which are exhibited in the flat, narrow terrain of the coastal plains. The floods and the transport of sediments have resulted in the formation of numerous valleys, slopes and hills, just a few kilometers to the east from the sea. The outer reaches of the city have a number of rivers running along it, which originate from the Sahyadri including the Kallayi Puzha, Korapuzha river, Chaliyar Puzha, the Iravanjhi Puzha and the Poonoor Puzha (Puzha meaning river).

According to the 2011 Census, Kozhikode’s population was 3,089,543. Kozhikode is ranked the fifth most populous city in Kerala and is ranked 115th as the most populous city in India. With the population density of 1318 persons per square kilometer, Kozhikode was ranked the 3rd most populous district out of all the 14 districts in Kerala, and the 48th most populous district out of the 640 districts in India. The average rate of literacy in 2001 was 92.26 and had increased to 95.08 in 2011. This means that 95 people out of 100, who are more than 6-year-old, are literate. The literacy for males was 97.57 and for females was 93.16. Kozhikode is ranked 7th in terms of literacy rate out of the 14 districts. The sex ratio in Kozhikode in 2011 stood at 1098 females to 1000 males. This means that there are more females in Kozhikode than men. Even data for children (aged 0-6 years) had been collected. There were 335,045 children in Kozhikode according to the 2011 census.

The three taluks of Kozhikode are spread over these 3 regions. The coastal length of the district is around 80 kilometers, out of which the lowland region occupies 15.55 percent area and the highland occupies 26.08 percent area.

The North-east monsoon follows soon after in the month of October and stays till November. Significant precipitation is received in these months. On an average, the annual rainfall is 3266 mm. The winter season is not so cold, though the weather does get milder in the months of December/January until March. The air is crispy and the skies are very clear.

The Korapuzha river joins the sea at Elathur after being formed by the confluence of Punnurpuzha and Agalapuzha. Whereas the Punnurpuzha (also a tributary of Korapuzha) originates from Arikkankunni, the Agalapuzha is kind of a backwater. The river’s length is 40 kilometers (25 mi). It is a perennial river and to join the sea, it passes through the study area’s northern boundary.

The western slopes of the Wayanad hills (which are a part of the Western Ghats) have forests from which the river Mahe originates. This river is also known as Mayyazhippuzha. This river empties into the Arabian Sea, South of Thalassery, at the former French Settlement of Mahe, after flowing through the villages of Mahe, Iringanoor, Iyyancode, Eramala, Olavilam, Naripetta, Bhekiyad, Tripangathur, Edachery, Kunnamakkara, Vanimel, Peringalam, Kacheri, Kariyyad and Azhiyoor. The river’s length is 54 kilometers and flows through an area of 394 square kilometers.

Almost similar to the Mahe river, the Murad river also originates from the western slopes of the Wayanad hills, which are a part of the Western Ghats. The only difference is that it takes its origin from the Narikotta ranges. At the Kottakkal fort, it empties itself into the Arabian Sea, around seven kilometers from the south of Vadakara. The river’s length is 74 kilometers. This river flows through an area of 583 square kilometers along with its tributaries such as the Kadiyangad puzha, the Vmathil puzha, the Onipuzha, the Thottilpalampuzha and the Madappallippuzha. This river is also known as the Kuttiady river and passes through Maniyur, Karuvancheri, Tiruvallur, Kuttiady, Ooakuzhi and Muyipoth.

One of the major rivers of the state is the Chaliyar river which is also known as the Beypore river in its lower reaches. The lower reaches of this river form a part of the West Coast Inland Navigation System. Its origin is from Tamil Nadu’s Niligiri District, from the Illambalari hills in Gudalur taluk. It has the tributaries which are the Punnapuzha, the Karimpuzha, the Vadapurampuzha, the Chalippuzha, the Pandiyar, the Iruthilpuzha and the Iringipuzha. The total drainage area of this interstate river is 2923 square kilometers. Out of this, around 388 square kilometers area lies in Tamil Nadu and the rest 2535 square kilometers lie in Kerala. This river’s length is 169 kilometers. Vazhakkad, Areecode, Mambad, Edavanna and Nilambur in Malappuram district are the cities this river passes through before joining the Arabian Sea near Beypore.

The Kadalundi river has two main tributaries, the Olipuzha and Veliyar, from the confluence of which the Kadalundi river is formed. Cherakkombanmala is the place from where Olipuzha originates and Erattakombanmala’s forests are the place from where Veliyar originates. The river’s length is 130 kilometers and has an drainage area of 1099 square kilometers. Around 5 kilometers south of the mouth of the river Chaliyar, this river joins the Arabian Sea. Also included in this basin is a small stream known as as the Pooraparamba river, whose length is only 8 kilometers. It has a drainage area of 23 kilometers. Along with the basin, the total area of drainage is thus 1122 square kilometers. From the navigation point of view, the Kadalundi river, also known as Karimpuzha and Oravanpurampuzha, is very important.

Connecting the Kallayi river in the south to the Korapuzha river in the north is a canal known as the Canoly canal, which was built in 1848. It serves many purposes such as a navigational channel and as the drainage to reduce flooding in the city during monsoons.

Facts and figures about Kozhikode