Located at a distance of just about two kilometers from the Kozhikode township is the scenic and calm locality of Aryadathupalam wherein is situated one of the most popular recreational boating centres called Kalipoika. All forms of boats like pedal boats and row boats have been made available here for the boating pleasure of the tourists as well as the locals commuting to places along the Malabar coastline. 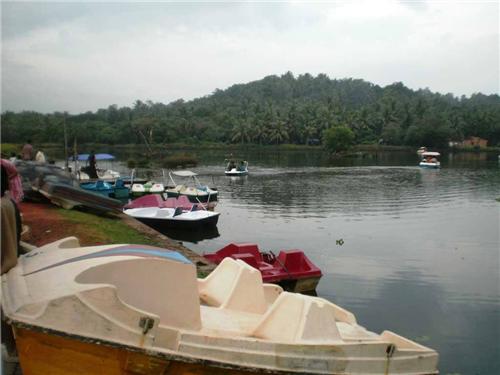 These boats ply on the waters from eight in the morning up to seven in the evening. There are boatmen available to help one along or one may hire a boat and row or paddle on one’s own. The weather is balmy almost all the year round with the maximum temperature climbing to thirty six degree Celsius and the minimum temperature being around twenty degree Celsius. The rainfall is mostly during the monsoon season. One can, therefore, visit this pleasurable, gateway of Kerala any time of year because it is greener, more pleasant and authentically appealing place to retire to for a relaxing holiday.

Things to See while Boating at Kalipoika

While taking a leisurely cruise along the Malabar Coast one can see some amazingly peaceful quaint settlements like the Peruvannurmuzhi coastal settlement along with the coast line, Kakkayam, Nadapurram, Mananchira Square, Beypore, as well as the Regional Science Centre which is a tremendous attraction for students and researchers. It is a quiet, peaceful cruise along the coastline as one stop over at one or two points. One starts out early and spends the long hours of the balmy afternoon indulging in browsing for hours in the small markets of these little coastal selling points that could attract tourist and local buyers alike. There are any numbers of small markets that are shoppers' delight. All kinds of typical artifacts can be found here ranging from clothes to jewellery to even a larger variety of foods.

Boating is almost always one of the most pleasurable pass times of a person at leisure. It is a soothing and very relaxing and cooling effect. The hustle and bustle of the mainland is all the more accelerated when viewed from the lap of the boat as the boats skim across the waters along the coast.

Among the interesting sights that one can see around and along the coastline as the boats go slowly are the Varakka Devi Temple not to miss the quaint fantasy of the Thikkoti Light house and serene, tranquility of the St. Mary Church as also the Buddha Vihar and Vellari Mala along the Wayanad Ghats.

The other places for sightseeing while boating along the Malabar Coast are Tushargiri, Iringal, Kuttiyadi, Dishakariravu as well as the Manachhira maidan and also the ancient Mishkal Masjid.

How to get there

By Air – The nearest Airport is at Calicut which lies about eighteen kilometers away from Kozhikode. It is easy to get to Kalipoika by road from Kozhikode.

By Rail: - The nearest railway station is at Kozhikode which may also be easily reached from Trivandrum, Ernakulum or Chennai which are large railway junction and which have frequent trains to Kozhikode.

By Road: - The roads are well laid and easily accessible. The national seventeen links Kozhikode to all of the Indian roads network. It can be easily reached by roads from Kochi which lies around one hundred and ninety kilometers away and it is nearer from Coimbatore which is located just one hundred and seventy eight kilometers away.

Reaching Kalipoika by road from Kozhikode is according to the following route where a southern route from Beach Road from continues to Panicker Road for a distance of about one kilometer passing the fisheries school on the left hand side. Taking a left at this point and easing onto the Red Cross Road one drives steadily along with the Beach Hospital on the left for a stretch of about one hundred and sixty meters and continue to the C.H flyover for about half a kilometer. Then turning right from the C- tee Jet to Edapally – Panod Highway and then left to the Padmevat Road crossing a distance. Then taking a left to the Pavamani Road and continuing onwards to the stadium Puthiyara Road for about one kilometer we shall be able to get to the Puthiara after turning left and getting onto the mini Bypass Road for about half a kilometer. Going straight one comes to the roundabout from when the third exit leads to the Mavoor Road from where almost a kilometer away one turns left towards Kalipoika Road. Turning right at the Kalipioka Road the destination or the Boating centre at Kalipioka.