Lokanarkavu Temple is a 1500-year-old temple that is situated 5 km from Vatakara, a small town in Kerala. Surrounding the temple are three rock cut caves. This along with the candid murals and carvings are quite enthralling to the visitors of the temple. The main deity of the temple is Goddess Durga and there are two adjacent shrines that are dedicated to the Gods Shiva and Vishnu. 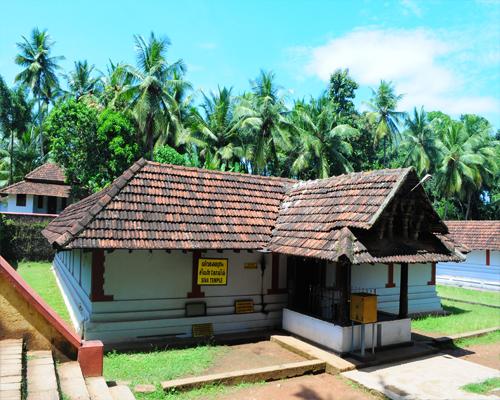 Lokanarkavu is the short form of Lokamalayarkavu that means world (lokam) made of mountain (mala), river (aaru) and grove (kavu). Built by Arya Vaishya Brahmins who migrated 1500 years ago, this temple has been referred in the ballards of the North Kerala frequently. It is also said that Thacholi Othenan, the legendary hero was a devotee of this Goddess. This temple is still the official family temple of the Aryan Nagriks, the ones who migrated here, and their successors. Though the Aryans migrated here, they strongly upheld their ethical roots from the rest of the people. When one enters the temple he or she must pray to the stage kept in memory of Aryan Brahmin ancestors who built this temple and get their permission to enter the temple.

This is mainly because the Lokanarkavu Durga holds them in high esteem and follows them wherever they go. Their happiness is of utmost importance for Goddess Durga. It is also said that without praying to the ancestor whatever prayer we offer in the temple goes unanswered. This tradition is not followed or experienced in any other part of the Kerala.

Thirty days of mandala utsavam during the month of Vrischikam, a Malayalam month (November-December) and the festival of pooram in the month of meenam (March-April) are the most important annual festivals of this temple. Pooram festival is celebrated for a week that begins with the flag hoisting (kodiyettam) and ends with the Arattu. The peculiar folk dance of Poorakkali which resembles martial art Kalarippayattu is performed in this temple during all the festivals. All the new Kalaripparyattu artists seek the blessings of the Goddess even today before the debut since the temple is assocoiated with legendary Thacholi Othenan. During the festival season, this place is thronged by large number of devotees from all over the world.

How to Reach Lokanarkavu Temple

Nearest Bus Depot: It is situated on the National Highway 17 that passes through the Vadakara. Kerala State Road Transport Corporation (KSRTC) and several other private buses operate frequent bus services to Memunda which is 6 Km from Vadakara where the temple is located.

From the Vadakara New Bus Stand head south towards Edapally-Panvel Highway Turn left onto Edapally-Panvel Highway passby Canara Bank on the right and turn right at Jubilee Textiles onto Vadakara – Thiruvallur – Perambra Passby Vijaya Bank on the left turn left onto New Bus stand Govt Hospital Road passby Galleria Color Lab on the right and turn right onto Memunda road passby Juma Masjid Makkoolpeedika on the left in 1.5 Km then turn right onto Kavil road and you will find the temple.

Nearest Airport: Kozhikode (Calicut) has an international airport which is some 87 Kms from Memunda.