The Malabar House Boats in Kozhikode can veritably be translated into luxury; the houseboats at Kozhikode afford a rare and amazing experience for anyone willing to take this luxury cruise. These house boats carry a service crew of four who take care of all the main activities being conducted on the boat. 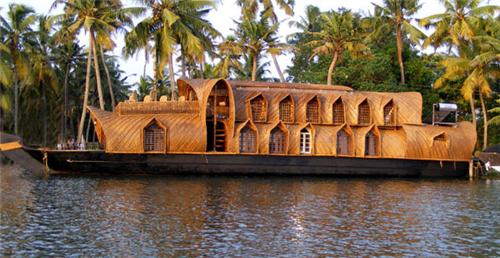 The Captain is in charge of the boat. He steers it clear of dangerous area and guides it along pathways that provide smooth sailing. He is also the tour guide and has information about all the surroundings. Then there is the actual driver of the boat and other vehicles that may be required for touring the area. The chef ensures that the guests residing in the houseboat have access to all the delicious Malabari fare while the service boy attends to all the needs of their daily activities.

The route of the cruise in itself is like a mini voyage of discovery in the backwaters of the river system. It is an awe-inspiring journey along the somnolent waterways as one is laid back in the comforts of the house boat. The stately coconut palms standing like silent sentinels on the banks of the Malabar Coast compete with the tall ‘Shikhara’ or towers of the temples and spires of the Churches. Equally alluring is the unique green spread of the paddy fields. Closer to the coast are the gaily bobbing lilies along the coastline as they overlook the glistening fishing nets that trap the delicacies of fresh water fish and other such water borne food. The houseboats come in a number of sizes and a variety of shapes. Even the prices are suited to almost every pocket ranging from the single bedroom boats to the multiple rooms inclusive of well appointed A.C suits. It is this large variety that attracts tourist for taking part in this novel experience. 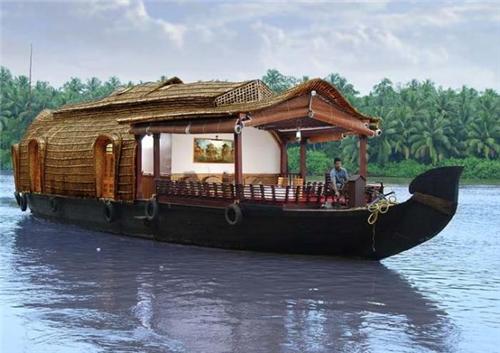 The Malabar Houseboats are exquisite example of the fusion of the traditional with the modern. These houseboats are beautifully carved with traditional motifs and artifacts that lend an elegance and versatility to the already beautiful atmosphere of the houseboats. On the modern side they have all the amenities ranging from an outboard motor for propelling the houseboats along the coast as well as state of the art kitchen, bedroom and bathrooms. The smaller houseboats have a bedroom which can accommodate a couple with a single child on separate bedding. Bigger houseboats hold two large suites.

Services provided on the houseboats include a typical theme dinner that is most delicious. Especially days when sea food is served like crabs and other Malabari preparations. One can book and avail for oneself some of the many services available onshore as well. The standard stoppages along the houseboat route take one to the beautiful temples and mosques that decorate the coastline. On the shore are artists who make instant portraits of the guests arriving in the houseboats. One can watch the traditional Martial Arts of Kerala called Kalaripayattu while sitting alongside the river in the traditional houseboats and savour the home made liquor called toddy. The guests may experiment with toddy and its several variations at the houseboats which stopover for a while to break the monotony of only travelling on the waters along the Malabar Coast.

There are a number of typical Malabar delights that are found only in this region. The houseboats serve these dishes in a memorable feast. Some of these delectable dishes are Kappa and the succulent meen or fish curry having the aroma and sweet taste of the coconut milk in which it is cooked. The medium of eating the Malabar dishes are the soft butter drenched paranthas the rice based, steamed appams, the rich spices biryani along with puttu and sadhya -all are served traditionally on fresh plantain leaves. The rare delicacies in this houseboat culture are the Karimeen pollichathu and the Malabar specialty of king lobsters.

These houseboats are ideal for visiting some of the nearby tourist spots like Calicut which boasts of the Tali Temple, the Mother of God Cathedral, the Kuttichira Mosque as well as the Anjuman of the Parsis.

Then there is Beypore which is the economic hub of all forms of spices, precious and semi-precious stones, silks and various other riches. This is the economic centre for trading as has been proven by the Arabs and consequent influence of the British and Portuguese after the advent of Vasco da Gama. There is also the centre of the timber business situated at Kallai which poses a great attraction for the travelers on the houseboats. At one time this centre was one of the world’s greatest centres for the supply of timber.

The Thusargiri triple waterfall is ideal for those who are fond of trekking and adventurous outdoor activities. Tourists enjoy this combination of comfort and strenuous activity that helps them work up an appetite worthy of the rich cuisine served on the houseboats. Some other places for going sightseeing are Kalipoika that lies just about two kilometers from Kozhikode. The Kozhikode Beach has attractions like the Lions Park which attracts the children’s and the marine water aquarium which is a source of delight for both adults and children alike.

There is also a huge rock that had at one time been a major defense for the coast. This rock is called Velliyamkallu and was steadfast against the onslaught of the Portuguese. The Thikkoti lighthouse that shines over and above the rock on the Moodadi Coast stands for centuries as it guides the ships safely in. The Kadalundi Sanctuary for an assortment of migratory and local birds located at a distance of twenty five kilometers from Kozhikode. Another ecological meter is the Kakkayam is teeming with a large variety of wildlife during the favorable season from November to April when the dam site draws a large variety of birds and animals. Another popular trekking area is Tushargiri where dense green forests are filled with all forms of birds and wild animals. Another site just about sixty kilometers from the dam site called Peruvannmuzhi. Set among the verdant hills this offers as beautiful picnic spot. Yet another waterfall set in the soft green area of the Vellari Mala is great for walking around.

The Wayanad Ghats are another tourist attraction that is situated at a much higher altitude than the rest of the countryside which makes the entire settlement look most inviting charming.

Then there is the huge power complex of the Kuttiyadi Hydro Electric Power Project at Kuttiyadi. Beside these the other places for sightseeing are Elathur, the Kallav River and the Canoli Canal besides the Kadalundi and the Kozhikode which is the world famous site for the majestic Kerala boat race called the Korapuzha Jalotsavan or the Water Festival of Korapuzha.