The Thiruvannur Siva Temple is a beautiful example of the Chola architecture with its characteristic pilasters, ‘vyalimukhas’, its ornate pillars as well as ‘panjaras’. The apsidal sancto sanctorum or ‘garbha griha’ of the temple is very well preserved. It carries an inscription that details the grant of land given to a certain official named Thiruvannur Patarakar sometime during the eight years of the reign of Raja Chera. This inscription is one of the clues to the level which literacy had risen during those times in these parts of the country. 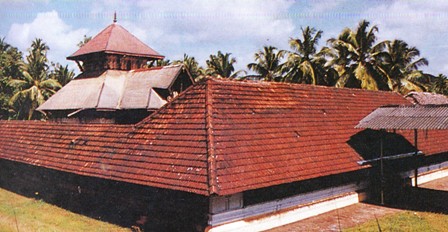 There is a large body of evidence to suggest that this temple had originally been constructed in honour of one of the Jain Tirthankara. This evidence is in the form of a citation of the rules that had been advocated and formally laid down for the Thirukkunavaya, which is among the foremost among Jain shrines in all of Kerala. Even though it began as a Jain Temple it was much later converted into the Siva Temple at some part of the eleventh century A.D. The architectural features of the inner sancto sanctorum are typical of the Jain temples of that period while the construction outside the ‘garbhgriha’ is a fine example of the architecture of the eleventh century South Indian schools of art and architecture.

The Thiruvannur Siva Temple of Kozhikode is the second ancient centre of traditional art and culture of this region where several ancient ceremonies and rituals are carried out. It has been the seat of learning of the Brahmanical codes of conduct for decades. The knowledge epitomised in the Vedanta, Vyakaran and language of ancient Sanskrit scriptures like the Puranas and Upanishads as well as Hindu mythological tomes.

Several festivals pertaining to Lord Siva are held at the temple along with the several colorful festivities of the Malayalam New Year are celebrated here with great pomp and show. The Siva temple is elaborately decorated with flowers, incense and lights for several days before and after the actual festival days designated for the festivities according to the Malayalam calendar. People throng to the temple on these special days to attend the variety of programmes held there.

How to Reach Thiruvannur Siva Temple

Connectivity by rail is also easily done and maintained from the Quilani railway station. The railway station is just about twenty six kilometers away. Here too there is proper arrangement for taxis and private cars that can be observed to carry the pilgrims, tourists and other travelers safely and efficiently.

There are some very comfortable and low budget places to stay at Kozhikode while visiting the Thiruvannur Siva Temple. The details of their location, conduct information as well as exact address are given below: